CARRAVIEW HOUSE, SELF CATERING COTTAGE ISLE OF SOUTH UIST
GOLF
Askernish, situated on the beautiful island of South Uist in the Outer Hebrides of Scotland, is home to a fine 18 hole links golf course offering stunning surroundings and an ever-changing challenge for any grade of golfer. First laid out by Old Tom Morris in 1891, before being abandoned in the 1920s, has been fully restored to its original position under the guidance of Gordon Irvine (Master Greensman) and Martin Ebert (Architect) using entirely traditional design principles, this course is a must for passionate golfers.
Enviromental experts have already hailed the Askernish as "the most natural links course in the world": the dunes' natural contours form the fairways, no artificial chemicals are used in maintenance, and during winter months sheep and cattle graze the course! The unique nature of the Askernish links and the culture of the Western Isles make South Uist a wonderful place to visit for all ages. 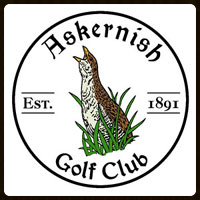 If you are heading north the A865 is the way to go although the minor roads are well worth exploring.

There aren't many Gaelic words that have made made it into English but machair is one. It means land behind the beach. There are lots of beaches. Quiet stretches of sand deposited by countless Atlantic rollers. The fertility of the machair is due to a mixture of peat and windblown sand, peat is normally infertile due to poor drainage. In summer you will notice many wild flowers. The scenery in the Outer Hebrides is amongst the most beautiful in the world - the sea is very clear. On a sunny day when it covers the white sands of the west coast it has more colours of blue and green than you can imagine. The white colour of the sand is due to its high shell content (over 80%). The marine life includes dolphins, seals, sharks and whales. The Minch (between the Skye and the Outer Hebrides) is one of the best areas in Britain for whale watching. Seals are particularly common and will be seen sunning themselves all round the islands. Not surprisingly the Outer Hebrides are also famous for shellfish which thrive in the unpolluted waters.

The Outer Hebrides are also noteable for numerous lochs. Some of these are brackish and others are dark and acidic, water lillies are quite common and many have populations of trout and charr. Birds include dunlin, redshank, plover, lapwing and the islands are the last stronghold of the corncrake. Nearly every beach seems to have a population of sandpipers. The islands are formed on the oldest exposed rock in the world, Lewisian Gneiss. This is grey coloured with bands of white and dark minerals contorted by the pressure of the earth. These were formed over 3000 million years ago, similar rocks are found today in Canada to which this part of Scotland was once joined.
Causeways join South Uist, Benbecula and North Uist. The car ferry terminal for South Uist is at Lochboisdale, though you might miss this out if you are cycling north from Barra. There is a food shop and a hotel providing bar food at the junction at Daliburgh (Dalabrog). South Uist is the hilliest of the Uists and the road has a few easy hills as it works north. There are possible diversions west on lovely little back roads and you might like to include these loops in your route if you can manage a few extra miles.
It's worth noting that there are regular bus services on the islands and that the drivers are usually quite obliging and will take bikes. This could be useful if there is a strong headwind or it comes on rain!
Secure storage is available at Carra View House for your bicycles and cycling equipment within the lockable garage. 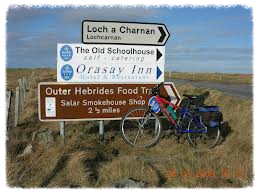 BIRDWATCHING/WILDLIFE
The bird watching on the island is spectacular; most particularly for raptors and a very wide range of wading birds, plus a range of infrequent rarities.
There are some 22 to 24 pairs of Golden Eagles nesting on the Uists, and in addition there are Sea Eagles which can be seen along the Loch Sgioport road beside Loch Druidibeg just outside the house.
In addition the island supports many pairs of Hen Harriers, Peregrines, Merlins, Sparrow Hawks, Buzzards and Short Eared Owls.
In this unique environment the Lapwing is common and the machair supports large flocks of Skylarks, Twite, Corn and Snow Buntings.
In addition there is an abundance of wading birds on the West shore. We also see Long Tailed Duck, Eider, Americain Widgeon, Green Winged Teal and a regular influx of rarities blown off course over the Atlantic.
The winter months can be the best time to see some of these birds, and in foul weather they can even be seen from the car.
Available to see is full range of Divers – Red Throated, Great Northern and Black Throated.
Later in the season the machair is home to many corncrakes – they can be heard calling on most days – actually seeing them is more difficult.
The flora and fauna of the machair can truly be described as unique – this is a very rare environment.

The island has a large head of pure Red Deer and an abundance of otters. There are no foxes or badgers on the island. www.western-isles-wildlife.co.uk 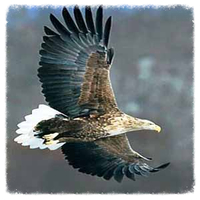 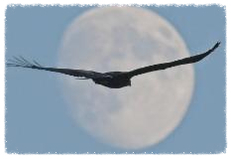 LOCH DRUIDIBEG NATURE RESERVE
This reserve is full of contrasts. Colourful machair grassland on the coast gradually gives way to moorland interspersed with lochans. Well-known for its breeding greylag geese, the reserve is also good for wildfowl and waders. Golden eagle, hen harrier and merlin are often seen over the moor while corncrake and corn bunting frequent the machair. Self-guided trail through croft land. Leaflet available from local tourist information office.
HORSE RIDING
There are 2 stables on the islands offering horse riding, and a range of rides on and off road, including the beach.

Check out www.ridehebrides.org which describes some of what is possible and is the web site for the Uist Community Riding School - the main stables on South Uist and Benbecula.

CULTURAL ACTIVITIES
There are a range of opportunities to get involved with Gaelic culture as there is a wide reange of archaelogical sited on the island including Neolithic dwellings, Viking round houses Chanbered cairns, brochs and duns.
PHOTOGRAPHY
One of the great pleasures of spending time on the island is the continuously changing light. This makes for some great photographic opportunities and with some of the most spectacular wildlife/birdlife around the waiting for the perfect opportunity is never dull.
Film supply is limited to standard film speeds on the island so do make sure you bring your own specialist equipment and film.
ART
An artists delight. Spectacular vistas combined with an ever changing light.
DAY TRIPS
To Barra by ferry. Take a short drive down to Eriskay, which is linked to South Uist by a causeway. There you can take a half hour ferry to Barra – enjoying the gannets fishing on the way. Shopping or take a tour round the ruined Castle. A relaxing half or full day trip.
KILDONAN MUSEUM

BIRTH PLACE OF FLORA MACDONALD
The former settlement of Airigh Mhuillin is known as the birthplace of Flora MacDonald, the woman who famously helped Bonnie Prince Charlie to avoid capture after the Battle of Culloden in 1745.
This settlement is now thought not to have been her actual birthplace, but there is evidence that she lived here for a time. A monument with an inscription was erected by the Clan MacDonald Society.
The remains of several blackhouses and stockyard enclosures are visible among the irises and pasture. Archaeological excavations over a period of seven years examined a number of the blackhouses and associated buildings, including a corn drying kiln. The settlement was shown to have been occupied from the late 1790s until the clearances in the mid 19th century.
Activity Weekends
Visit the website below for information about Activity Fun Weekends 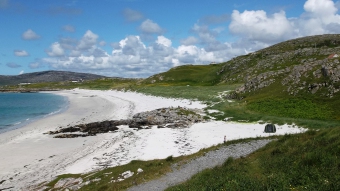 AN ARTIST'S AND PHOTOGRAPHER'S DELIGHT!!

We are located at:

Get social with us.